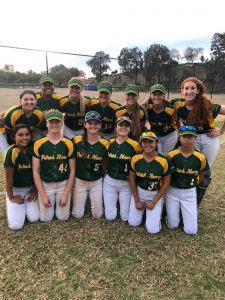 SAN DIEGO (2-28-20) – The home team Patriots trailing late in the game rallied with five runs over the fifth and sixth innings and never looked back in the comeback victory on Friday.

Early on things looked like the Patriots would roll as their bats clicked right away after trailing 1-0 on a Jade Daley base hit bringing in Kimmy Bond. Leading off in the bottom of the first inning Kiah Altmeyer hammered a solo home run over the right-center field fence to tie the score at 1-1. The next two batters Jessica DeWitt and Lauren Nett each singled, a couple of batters later with one out Savannah Chapman drove in both DeWitt and Nett to give Patrick Henry a 3-1 lead. They would add another run courtesy of a ground out by Ariana Rios allowing Chapman to race home extending the lead to 4-1.

Grossmont would cut the deficit in half in the top of the second inning as Halle Sweiss led off with a double, she would advance to third and scored on a ground out by Katelynn Parent making it 4-2.

Things got really interesting in the top of the third inning after the Patriots changed pitchers bringing in Aubry Purvis. Leadoff hitter Alyssa Bolden would be hit by a pitch, Kati Contreras walked, Daley singled to load the bases. Grossmont with the bases full and one out was able to push across another run courtesy of Issy Cervantes who knocked in Bolden, Sweiss followed with a bases-loaded walk bringing home Contreras which tied the game at 4-4. Patrick Henry brought back in Chapman who walked Caitlyn Potts which allowed Daley to score giving Grossmont the lead 5-4.

After getting out of the inning and moving to the bottom of the fifth inning the Patriots were running out of chances. They would change the momentum starting with a double by Nett, Edie Guthrie followed with a base hit and once again the game would be tied when Shayleen Chapman knocked in Nett. A couple of batters later with one out and runners second and third Sydney Newton would double in both Guthrie and Chapman to make it 7-5, They would add another run in the inning to make it 8-5.

After another RBI single by Chapman in the bottom of the sixth extended the lead 9-5, the Hillers were down to their final three outs in the top of the seventh inning.

Daley led off with a single to center field, a couple of batters later with one out Cervantes walked. However, that would be the only runners the Hillers would garner as Chapman retired the next two batters to end the game.

Contreras took the loss for Grossmont as she gave up 8 runs on 10 hits in her 4.1 innings of work, she also walked 1 on the day.

For the Patriots, Chapman collected the win as she walked 3, struck out 7 and only allowed 1 hit in her 4.2 innings of work.