This year the two tournaments fell on the same weekend therefore, Coach Trustin took advantage of the opportunity and  split the program into two teams. 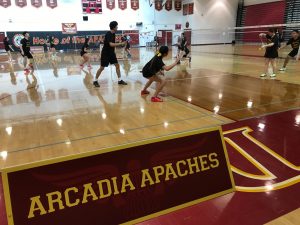 The Varsity team traveled to Los Angeles to compete in the Arcadia Tournament and the JV & 1st year players competed in the Madison Tournament.

The Madison HS tournament for the JV and first year players was an opportunity to gain experience and playing time. As for the Arcadia Tournament, Lawrence Taing (seeded #2 coming into the tournament) won 2nd place in Boys Singles (Losing to #1 seeded Joshua Yang from Rowland HS), while Leon Taing & Andrew Nguyen (seeded #4 coming into the tournament) was Semi-finalist in Boys Doubles (losing to #1 seeded Kevin Yoo and Arnold He from Arcadia HS).  Lawrence Taing and Kayla In paired up in Mixed Doubles and won Consalation (equivalent to 5th place).

Overall, we were able to rack up some success over the weekend. The Patriots have their first home match Wednesday March 11 at 3:30pm against University City HS. Go Patriots!