Recap of the Week: A Tie with Coronado & Win Over Serra 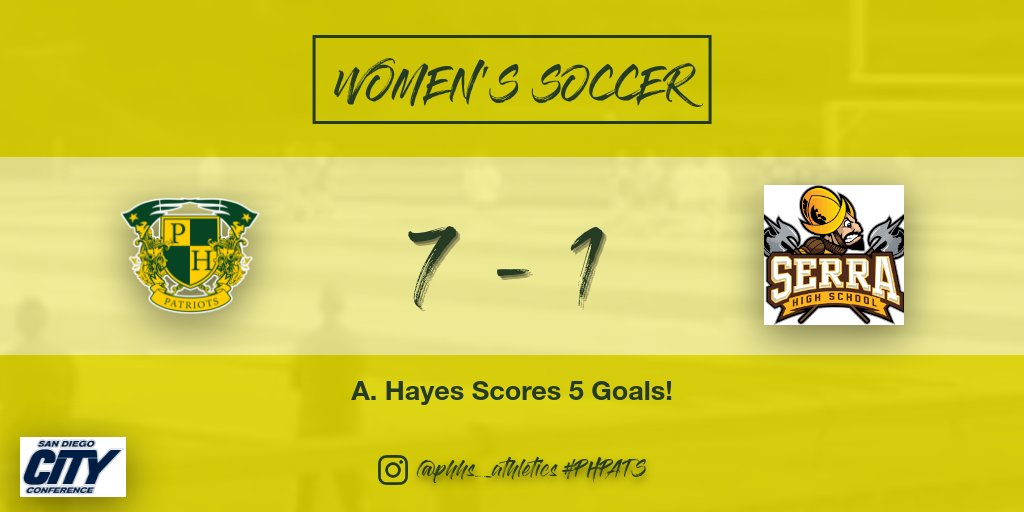 Patrick Henry Women played two games this past week going 1-0-1. On Wednesday the Lady Patriots took on first place Coronado. The game was a very evenly matched. The Islanders struck first in the 2nd half with a nice through ball and strike for inside the box. This seemed to energize the Henry ladies as they became more aggressive and began to take control of possession. Inside 10 minutes to play Henry finally got a very deserving equalizer. It was Riley Calbow that won an important tackle that went onto the foot of Abigail Hayes who immediately turned and slid Addison Slinger in from the right wing. Addison’s pace put her in a prime position to blast the ball past the Islander goalkeeper. The game ended in a 1-1 draw which both teams deserved the point.
On Friday the Lady Patriots traveled to crosstown rival Serra. Henry got off to a great start moving the ball at will. Possession was completely being dominated by Henry until one counter attack deflected off a Henry player and trickled into the goal. This was not the start Henry were looking for but that was very shortly lived. Henry quickly picked-up where they left off controlling possession and creating numerous opportunities. Finally, Abigail Hayes was played in behind the defense by Gigi Gigante and Abigail slotted the ball past the keeper.
With the score 1-1 and Henry on the front foot this was the beginning of a night Abigail will remember. The 2nd goal came off Addison Slinger’s cross that was met on a half volley by you got it Abigail Hayes. This was textbook cross and finish at the highest level. Abigail would continue to enjoy her evening scoring 3 more goals giving her 5 on the night. Addison completed the scoring with 2 goals of her own that were spectacular. Caitlin Cogan returned from injury and provided a huge spark up top that created so many opportunities for the Lady Patriots. The inside 3 Gigi Gigante, Avary Simko, and Maleia Ferreira continued to run the show from the middle creating for all 7 of the goals. Defensively Vanessa Hurst, Kasey Dill, Samantha Bancalari, Meg Holmes, and Makenna Hunt provided all the coverage keeper Sofia Zambrana needed to enjoy a great night.
Henry are currently 1-0-3 in league play and now head into the back half of the season looking to close out a great league season and get a high seed in CIF Playoffs.
May
14