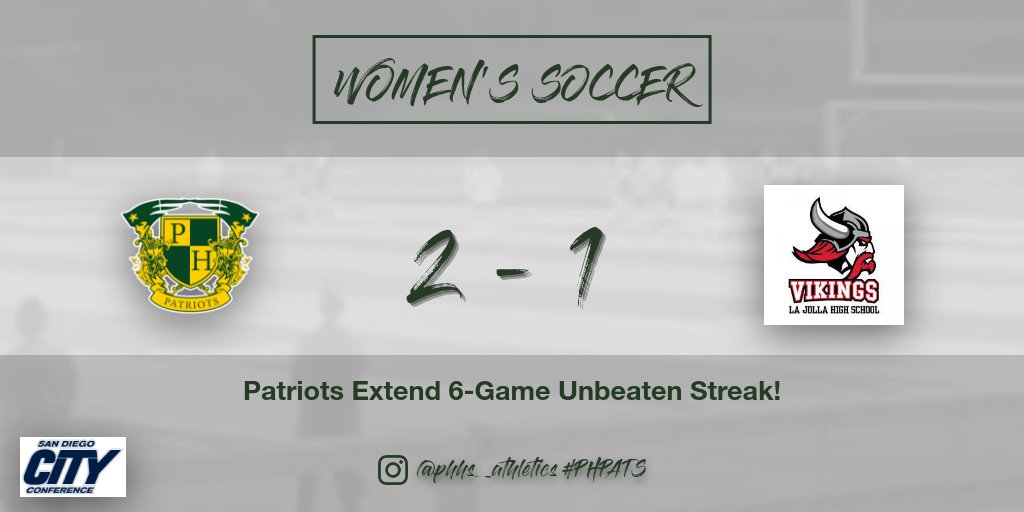 On a warm Friday evening in La Jolla, CA the Patrick Henry Patriots Women’s Soccer team took on La Jolla High School.
The Lady Patriots began the game with a ton of possession moving the ball all over the field. With the Vikings defense looking to contain the Lady Patriots it was a matter of time before a goal would come. In the 25 minute mark the Lady Patriots countered with Caitlin Cogan’s and Addison Slinger’s pace and the ball fell to Addison who smashed a right footed shot into the low side of the goal.
The game would begin to open up a bit moving forward and La Jolla had a couple of opportunities but Sofia Zambrana again was solid shutting out the host Vikings in the 1st half. The 2nd half began with Caitlin Cogan again creating an opportunity down the right side. Caitlin from a very difficult angle blasted in a goal into the the roof of the right post (upper 90). The Vikings team were stunned as they claimed the ball slid through the side netting somehow. After a pause from the game and back and forth discussion the goal counted and the Lady Patriots had a 2 goal lead.
Well that was short lived as the game became a bit choppy. The Lady Patriots went down a player after a back and forth between two athletes. So for the last 16 minutes the Lady Patriots would have to defend a 2 goal lead.
The Vikings got 1 goal back in the 40th minute making the final minutes a heart pumping nervous period. After many hard fought tackles and clearances the Lady Patriots held off the Vikings to continue their unbeaten streak to 6 games.
Next up is a home match against San Diego HS on Wednesday May 5. Go Patriots!
May
14